Strategies For Sleep, With Twins

You’re the proud parent of twins!

Twin babies, especially for first-time parents, are a massive amount of work. One of the most valuable investments in your whole family’s well-being is to get them sleeping well.

Now, it’s going to be a little more complicated than teaching one baby some solid sleep skills, for many reasons. If one baby wakes up crying, the other will likely be right behind them, and soothing two babies at the same time is just objectively tougher than one.

To further complicate the situation, twins are often premature and premature babies are typically very sleepy. And because one baby crying is likely to wake the other, parents of twins are often quick to rush in and soothe a crying baby back to sleep by any means necessary. This can lead to stronger sleep associations.

It won’t be a walk in the park. Holding space for your little ones to build those awesome sleep skills will be tough.  It’s going to require determination and discipline. But, it’s absolutely achievable. Once your little ones have got the hang of it, you, my friend are going to have a much easier go of things.

Think about it; let your mind manifest what would you do with the extra time you’d have once both your babies are napping on the same schedule. Let alone, knowing that when they are asleep at bedtime, it’s for the whole night. It’s a game-changer for most parents of one baby, so multiply that by two and you get… the ultimate game-changer!

It’s going to be tricky, but if you’re ready, let’s dive into some strategies to maximize your chances for success.

I usually suggest putting both babies in separate rooms-if you have the space. Keep in mind that it doesn’t have to be a bedroom. You can set up a pack and play in your office if that’s available. But please know it is not necessary. This can be done with both babies in the same room. Having them in separate rooms can simply help prevent one from waking up the other. It’s just a temporary setup while we get those skills honed, so don’t worry about giving up a room permanently. In a few weeks, you should be able to move them into the same room once again.

2| Keep them on the same schedule.

The great thing about twins is that their sleep needs are going to be pretty much the same. So putting them on the same nap/bedtime schedule is effective for both of them.

Now, you’ll likely run into a situation where one baby sleeps longer than the other. That’s fine up to a point. I set the limit at about 30 minutes before you should wake up your other baby to prevent them from getting too out of sync. When nap time rolls around again, just ignore that extra 30 minutes and put them down at the same time.

Having both babies going down and waking up at the same time is also pretty important for mom’s sanity. Having a little time to yourself during the day can make all the difference in the world. Once they’ve adapted to their new schedule, you’ll have a lot more time to take care of the other responsibilities that come with having two babies. You might even get a little “me-time” in there.

As for nighttime, mamas of twins are a little more likely to respond quickly when one of them wakes up crying in the night. You may be more likely to try to quiet Baby down with whatever method is quick and effective in order to prevent them from waking up their sibling. For the next seven to ten days, I’m going to ask you to resist that impulse a little. I’m not suggesting you shouldn’t soothe a crying baby. However, if your usual response is to rush in and offer a feed, a pacifier, or rock baby back to sleep, you’re probably impeding baby’s ability to develop their internal sleep strategies. Remember, letting them figure out how to fall asleep on their own is a vital part of the process.

4| Pick a good night to start.

It’s a big ask, I know, so plan to get started on a night when you don’t have to be up early or looking your absolute best the next day. Sweet friend, the first few nights are likely to be a little rocky. Just remember that you’re going through this rough patch in order to arrive somewhere wonderful on the other side.

As for the very likely scenario that one baby wakes up and the other doesn’t, this is where things can get a little tricky. We want to keep them both on the same schedule, but we also don’t want to interrupt their sleep if we don’t have to. My advice on this situation, outside of weight gain issues or specific instructions from your doctor, let your babies sleep. If one wakes up for a feed, don’t wake the other one and offer a feed as well. We’re going to let sleep be the priority for now and allow Baby to make up the calories during the day.

After three or four days, you’re going to notice something magical start to happen. As those independent sleep skills start to develop, you’ll realize that one fussing baby won’t be nearly as likely to wake up their sibling. That’s because they’re spending more time in deeper stages of sleep. As you’ve probably noticed, when a baby gets into a deep sleep, they can sleep through almost anything.

The other benefit that’s going to start taking effect is that sleep begets sleep. It’s a little counter-intuitive, but overtiredness fires up our cortisol production which makes it harder for us to get to sleep. So as your twins start sleeping more, they’ll actually have an easier time getting to sleep, and staying asleep long enough to get into that sweet, restorative, deep stage of sleep that we’re looking for.

Finally, make sure you’re ready before you get started.

I see a lot of parents get started when they’re not fully committed to the process. This leads to them  quitting a few nights in. This can become very confusing for their little ones. Even more concerning is that it teaches them that they need to fuss louder and longer in order to get mommy to come and help them to sleep. So if you’re not entirely sure that this is the time, that’s truly fine mama.

Consistency is the key here, so don’t just “give it a try” if you don’t think you’re ready to commit.

It’s going to be a lot of work, make no mistake. However, I can promise you that it’s going to be so, so worth it. And I’m here to support you every step of the way once you decide it’s time to get those sweet little bundles sleeping through the night.

Sweet Lullaby Sleep Consulting’s advice is NOT intended to be a substitute for medical advice or treatment. Always seek the advice of your doctor or other qualified health practitioner regarding any matters that may require medical attention or diagnosis, and before following the advice and using the techniques suggested. Reliance on any information provided by Sweet Lullaby Sleep Consulting is solely at your own risk. 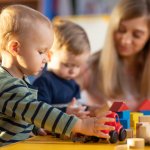 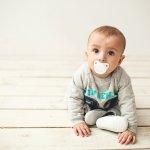