Is your little one waking up in the middle of the night?

If you’re the parent of a baby who’s dealing with segmented sleep, you know exactly what I’m talking about. This isn’t the middle of the night “go in and comfort baby for ten minutes until he gets back to sleep” wakeup. This is a full-blown 3:00 a.m. PARTY.

So what is a split-night exactly?

It’s got a few names. Segmented sleep, bifurcated sleep, split nights, and it describes a situation where your little one sleeps for a long stretch – then wakes up happy and energetic in the middle of the night, and stays that way for an hour or more.

This isn’t a new or unnatural phenomenon. Back before the widespread use of the electric light bulb, people would regularly sleep for a few hours, wake up for another hour or two, then go back to sleep. They’d use the time to read, smoke, pray, have sex, (not necessarily all at once) and then after an hour or two, they’d get back into bed and sleep until morning. (Apparently, it was also a common time for visiting one’s neighbors. Not to hate on the old days, but if my neighbors came over unannounced at three in the morning, oooohhh, it would not be pretty.)

Nowadays, however, the vast majority of us go to sleep at night and, hopefully, close our eyes and sleep straight through until morning.

But let me guess… your baby didn’t get the memo?

This is actually a pretty common issue. Baby goes down at 7:30 at night, wakes up at 3:00 in the morning, parties for an hour and a half, then goes back to sleep, apparently careless about the groggy, miserable day she’s set her parents up for.

So let’s take a quick look at why this happens.

There are two major drivers when it comes to sleep.

So ideally, over the course of the day, sleep pressure builds up, then at bedtime, when the pressure hits the sweet spot, baby puts her head down and goes to sleep. As that sleep pressure begins to subside, circadian rhythm takes over and baby stays asleep until morning.

In the case of a split night, we could be looking at one of two reasons why they’re waking up.

Now before you pitch your phone out the window at that seemingly paradoxical explanation, check this out.

If baby’s getting to bed too late.

If too much sleep pressure has built up, the brain has this instinctive response that says, “Hey, you’re tired but you’re not sleeping. I’m guessing that’s because there’s a carnivorous apex predator around, so we’d better get ready to make a break for it,” and then starts upping the cortisol levels which helps your body push through without sleep.

The brain means well, but it’s a little behind the times on our need for such alerts.

So this can make it tough for baby to get to sleep at bedtime. That cortisol’s got them a little bit jacked, and it can also cause a full wake up at the end of a sleep cycle, which commonly happens around 2 or 3 in the morning. Ugh.

If this is the case, you’re one of the lucky ones. Treat this like any other night time wake up. Reassure baby that it’s still bedtime, comfort her and let her get back to sleep on her own. Then consider moving bedtime up a bit over the course of a few nights.

But then there’s the alternate scenario.

What if baby’s getting to bed too early.

In a situation where baby’s getting lots of quality daytime sleep and going to bed early, it’s possible that there’s not enough sleep pressure built up to keep baby sleeping until their circadian rhythm takes over and helps them sleep through the rest of the night, so up they get. And now that there isn’t as much sleep pressure, and their circadian rhythm doesn’t have the horsepower to get them to sleep on their own, suddenly they’re up and active for an hour (or three!) while that pressure builds back up.

Please don’t get me wrong, I’m all about early bedtimes. Too little sleep is a much bigger problem than too much. But if your baby’s experiencing this kind of split-night sleep, it’s worth looking at their schedule. Doing a little fine tuning is always okay to ensure that you’re hitting the optimum sleep pressure right at the same time that baby’s going to bed for the night.

I know there’s plenty of situations that can arise where you’ll want to get baby to bed a little early. If she had a day of lousy naps and is clearly tired a half hour before bedtime, it’s absolutely the right move to get her to bed ahead of schedule.

Just try to avoid putting baby to bed early more than one or two nights in a row.

We want to prevent overtiredness. But we also don’t want them in the crib at night for more time than they’re actually capable of sleeping. So if baby’s had a tough day and didn’t nap well, it’s fine to get her to bed a little early. Do your best to get her back onto the regular schedule starting the next morning, including her wake-up time.

I know that this can all start to sound too confusing. In some ways it can be pretty complicated. However, the more you understand the nuances and know where to make those minor adjustments, the better your baby will sleep.

One final thing to consider if you’re getting ready to tackle this situation.

This is not likely to be an overnight fix.

Once baby has gotten into this habit, getting them out of it can take some time. Like any attachment or dependency, overcoming it is an incremental process. It’s likely to meet with some pushback, so if and when things get tough, remember your goal. You’re giving your little one the skills they need to sleep soundly through the night. This will contribute to their well-being in so many different ways. Stay consistent. Be patient. Before too long your baby and you will both be enjoying full nights of deep, restful sleep. 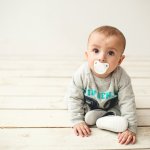